NOTE: Tonight we're working on the fundamental team tactics, which is ultimately how to decisively win any firefight, we're going to work towards FIND FIX FLANK FINISH but ultimately we're focusing on SITUATIONAL AWARENESS and SECURITY

NOTE: What is SITAWARE? What is Security

You will find yourself grouped with different players in different missions, and your comprehension of this guide is what will allow you to all act as a cohesive and combat-effective group, regardless of who exactly is in your fireteam.

Maintain appropriate interval.
Bunching up gets people killed. Keep several meters of distance between yourself and other players at all times. If not, a grenade, rocket, or machinegun is going to have a fun time with you and those you have clustered with.

Cover your sector. 360° security is needed at all times.
This means that with a fireteam of six, every person should be observing or covering a different area. Good security means that your team is that much less likely to be surprised by the enemy, and thus is going to survive longer in combat. When halted, ensure that somebody is paying attention to rear security as well. If nobody else is, take it upon yourself to do so - your team will thank you later.

NOTE: The only territory that we own is the territory on which we are currently stood, and even that can be taken from us at a moments notice. Never consider covered ground safe.

Maintain situational awareness
This all helps to prevent being surprised by enemy contacts, prevents friendly-fire incidents, and gives you an idea of what areas may need more observation based upon how the squad or platoon is oriented.

NOTE: What is situational awareness?

All of the above are CRITICAL responsibilities of all people in a team, and the sum of that effort is what makes a team an asset to a Squad. Talk about buddy teams next: https://unitedtaskforce.net/training/sop/basic-infantry/combat-buddy-teams

Scan for, spot, and call out enemy contacts.
Do it concisely via voice so that everyone can hear you. When giving the direction of contacts, relative directions (front, left, rear, right) can be used when friendly forces are moving in a known direction and front, rear, right, left are known to everyone. Otherwise, compass directions and degree bearings should be used. More on this in the "Contact Report" section later on. We will cover contact reporting in Phase 3.

Questions to ask yourself

What to listen for

NOTE: Remember many of you might be SITAWARE, but are you communicating it effectively - in order to increase the SITAWARE of others around you - and the platoon or company as a whole?

Be concise on comms.
Learn how to speak with brevity on voice channels to avoid cluttering them up when they're most needed. 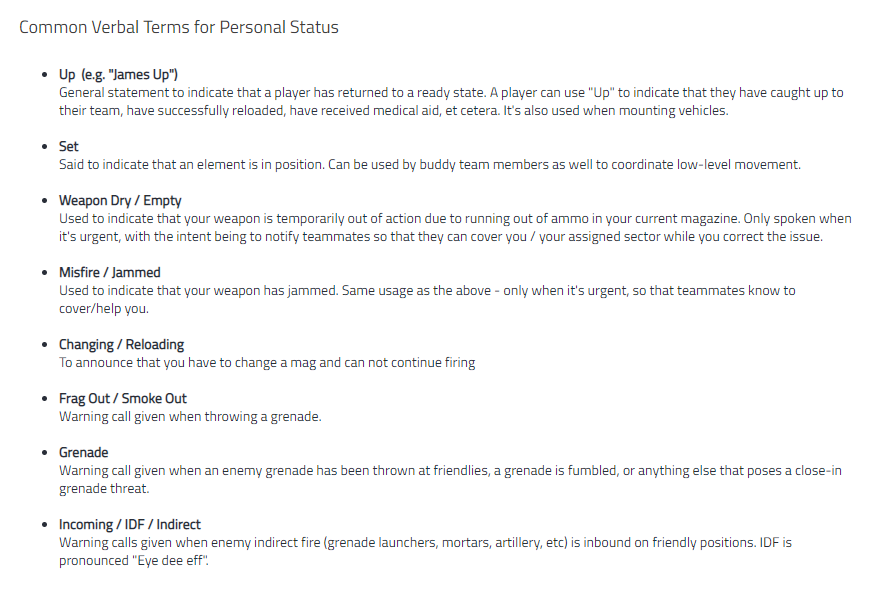 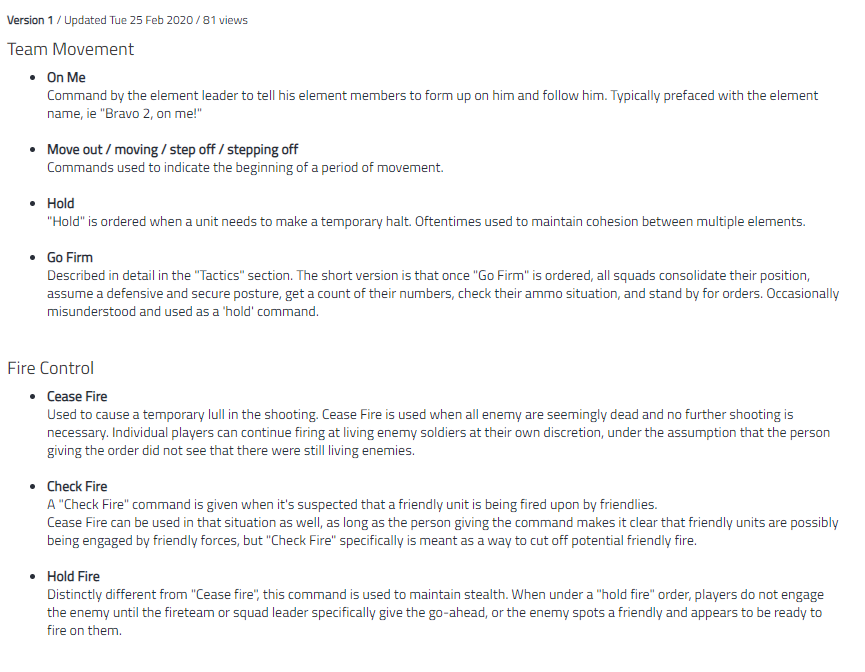 Each team (2 teams) is inserted to a BOF position over an objective (each team takes separate BOF positions) they get 5 minutes to RECCE and note down significant observations according to SIT-AWARE guidelines they must also maintain security over 360 degrees during this time.

After 5 minutes, the teams switch objectives and do the same process again.

After both teams complete both objectives, we de-brief, each team comments on their first AO and then any gaps can be filled by the second team. The instructors can throw in comments or glaring holes if they feel like it.

We tell the teams that they will be assaulting these AO's in the next phase.