United Task Force ("UNITAF") was formed in June 2019 by a group of experienced Arma players, the founder previously ran a successful Arma 2 group, before getting back into Arma 3 last year. We have members from all over the world, including Canada, USA, Europe and Asia. All operations are conducted in UTC and center around the European timezone, but we are flexible - and plan to support as many operations as possible.

Realism where it matters

We take the game seriously when we’re in the game. We simulate the military in game, through solid teamwork and cooperative gameplay. We do not carry the simulation outside of the game, where it's much more relaxed, there are no customs and courtesies and no shouty drill instructors. We do not believe in calling people Sir based on an online rank. That said, we have a solid organisational structure, and every member is appointed someone in the chain of command that they directly contact for whatever reason.

We don’t require you to attend specific dates or times, or excessive sessions. All that we ask is that you attend 1 operation every 30 days when it works for you. Members are organised into two groups, Regulars and Reserves, depending on their activity level. Super active persons can pursue joining the staff or contributing teams, which is encouraged.

We use a dynamic ORBAT system using the software built by our members. Unlike many groups, our teams are not fixed, but we also don’t wing-it at night either. ORBATs for operations are posted at least one week in advance, and members fill the ORBAT on a first come first serve basis.

NOTE: Below are some screenshots of our self-developed web-application which lies at the core of UNITAF, these images relate to the operations center portion. You can view the live version of our site at https://unitedtaskforce.net/ 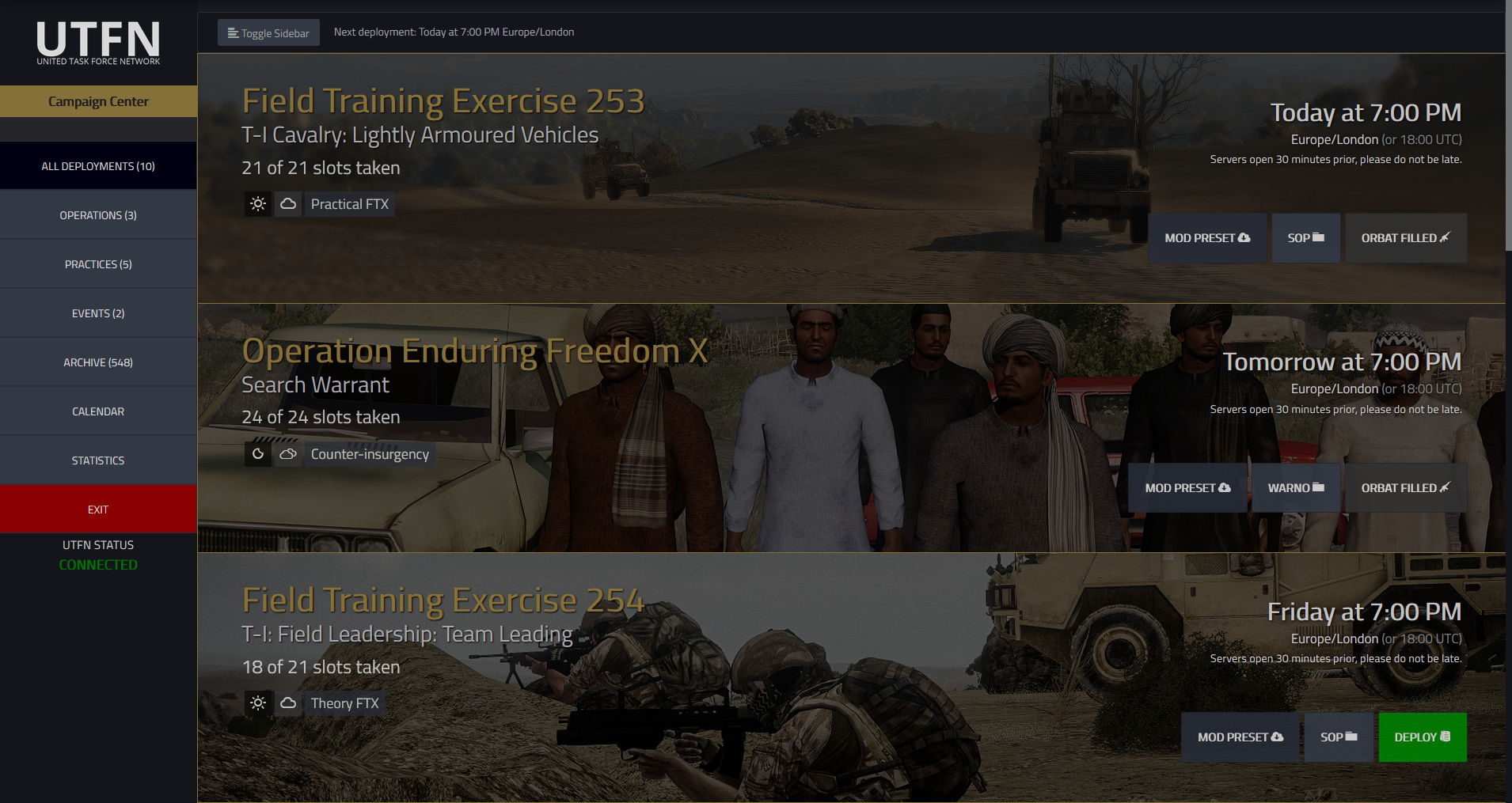 NOTE: Below ORBAT view or Order of Battle, allows players to deploy to mission slots days or weeks in advance, and only allows slot allocation based on training or rank requirements, but provides flexibility to choose their roles for each mission, but at the same time having fixed teams prior to the mission start. ]] 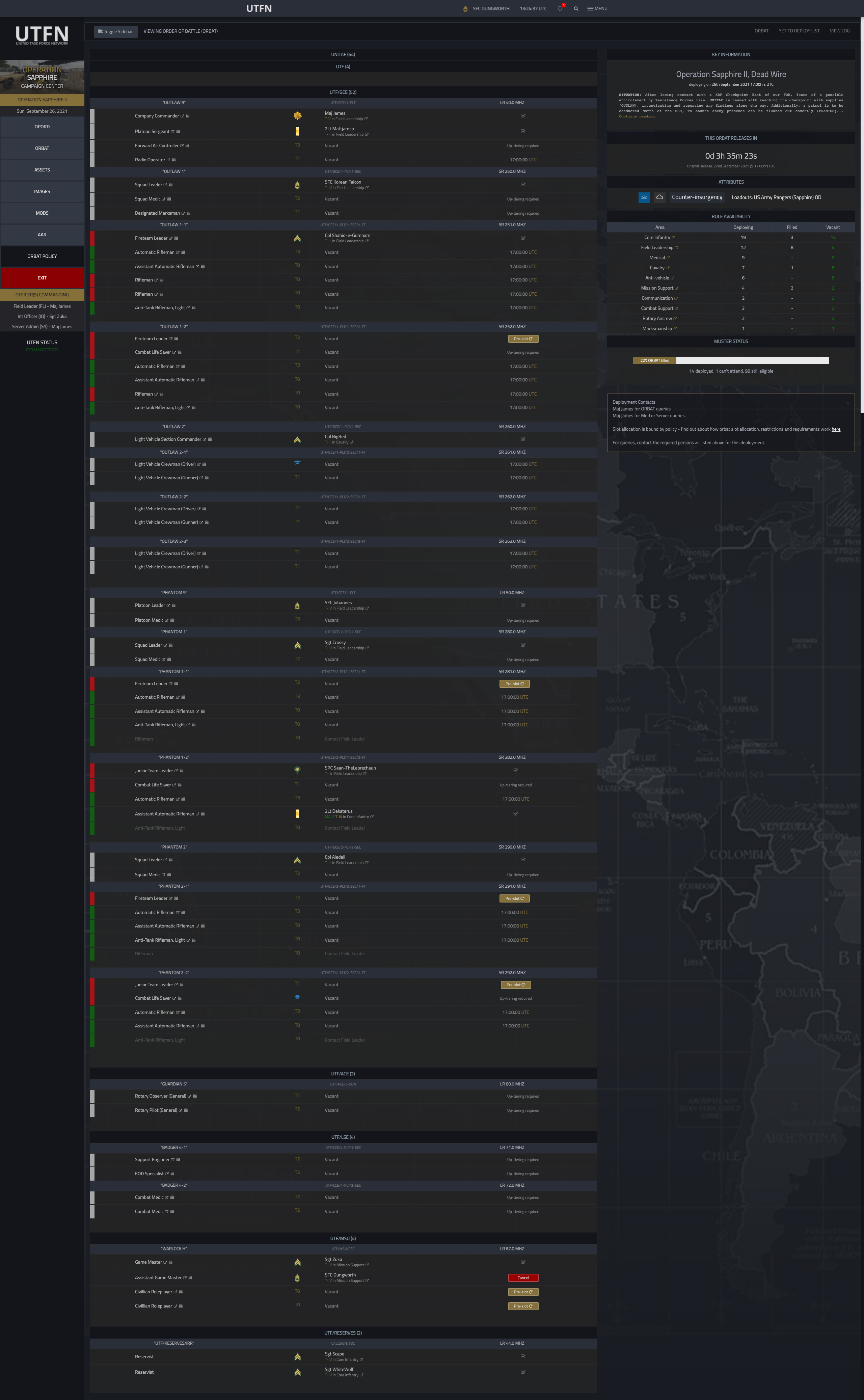 NOTE: Below OPORD view, shows the upcoming mission briefing or 'Operations Order' prior to the mission start.

NOTE: Below AAR or After Action Reports - all players submit them for every operation, rating various metrics of the mission allowing leaders and designers to react to player feedback. 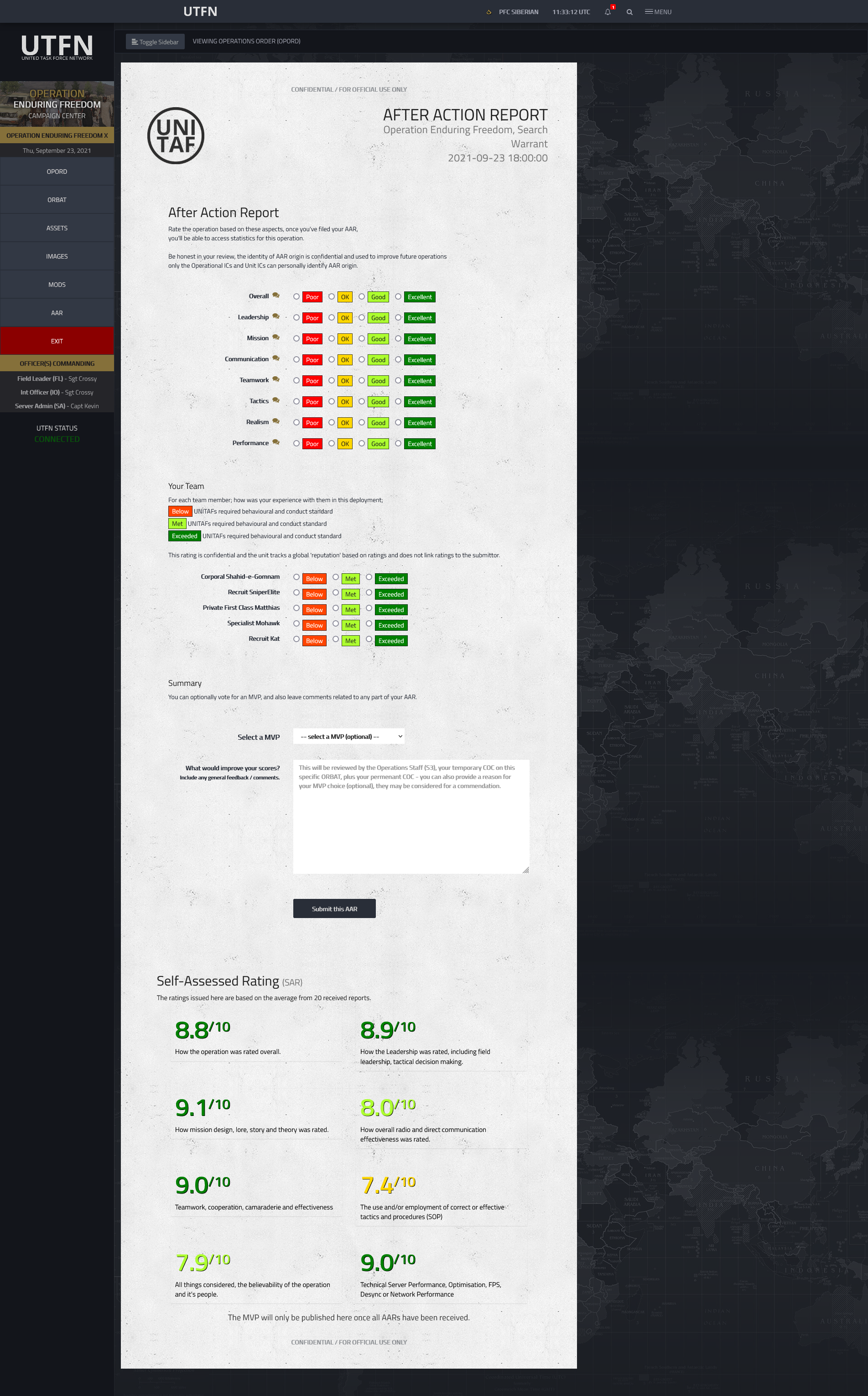 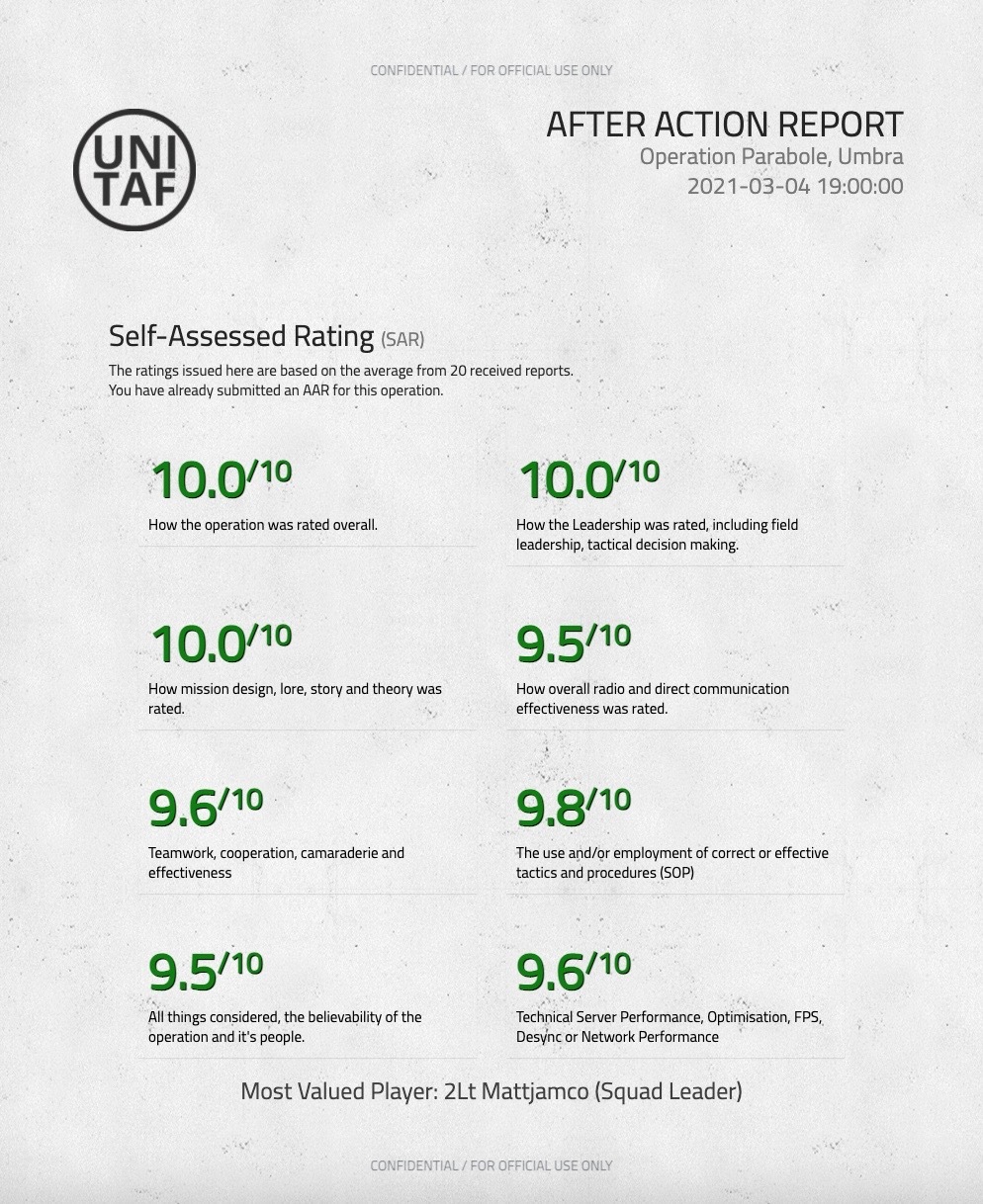 NOTE: Our world class action reporting system, we designed a feedback system into our network and all members file one after a mission concludes, we rate 8 separate metrics, collect information on potential MVPs and comments from everyone, which helps us to consistently improve the experience. We can instantly compare these to all previous operations and it allows us to highlight our strengths and weaknesses.

We have an incredibly in-depth Career Tracking and Statistics System.

The software built by our members is exclusive to us, and week-by-week is expanded. We’re not on about some off-the-shelf, mickey mouse forum software either. The whole application has been and is being built from scratch by us, with ideas from our members. Every member logs in to a single system and it’s used to coordinate and automate the majority of the day-to-day operations. Some of the features are; 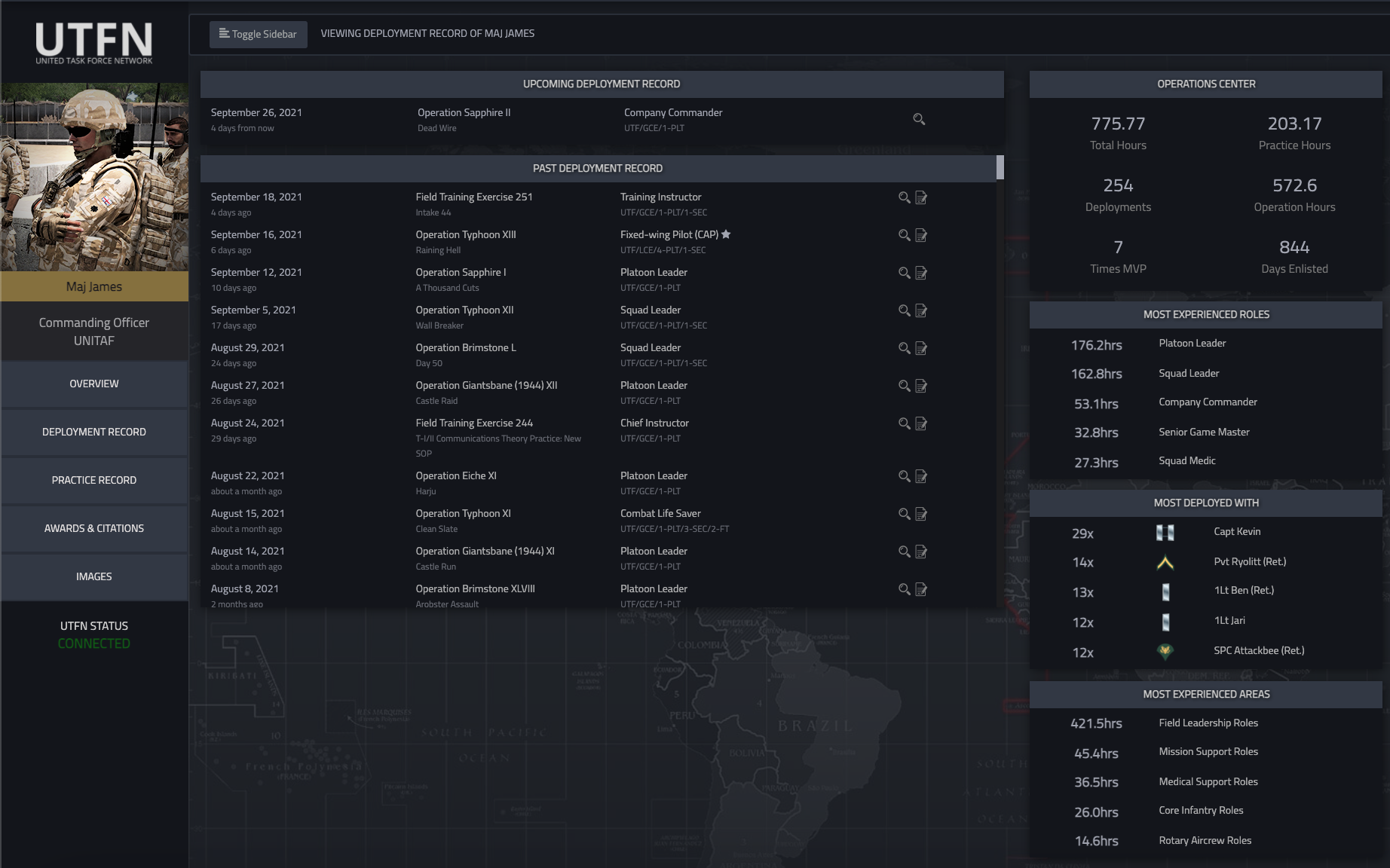 NOTE: With qualifications, bite-sized standard operating procedures based on Dyslexi's TTP3. US Army TRADOC and our own adaptation where required.
NOTE: Training Areas 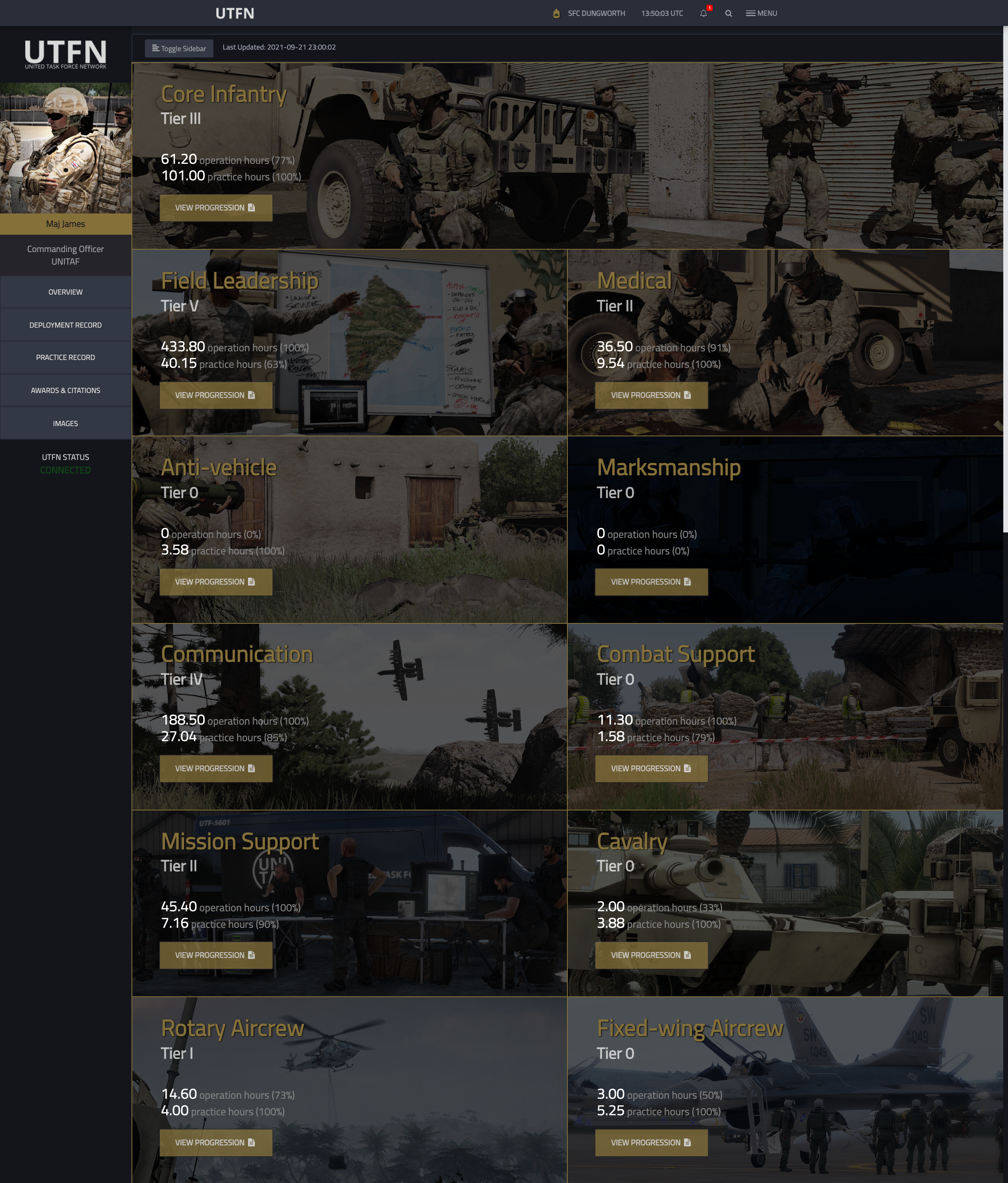 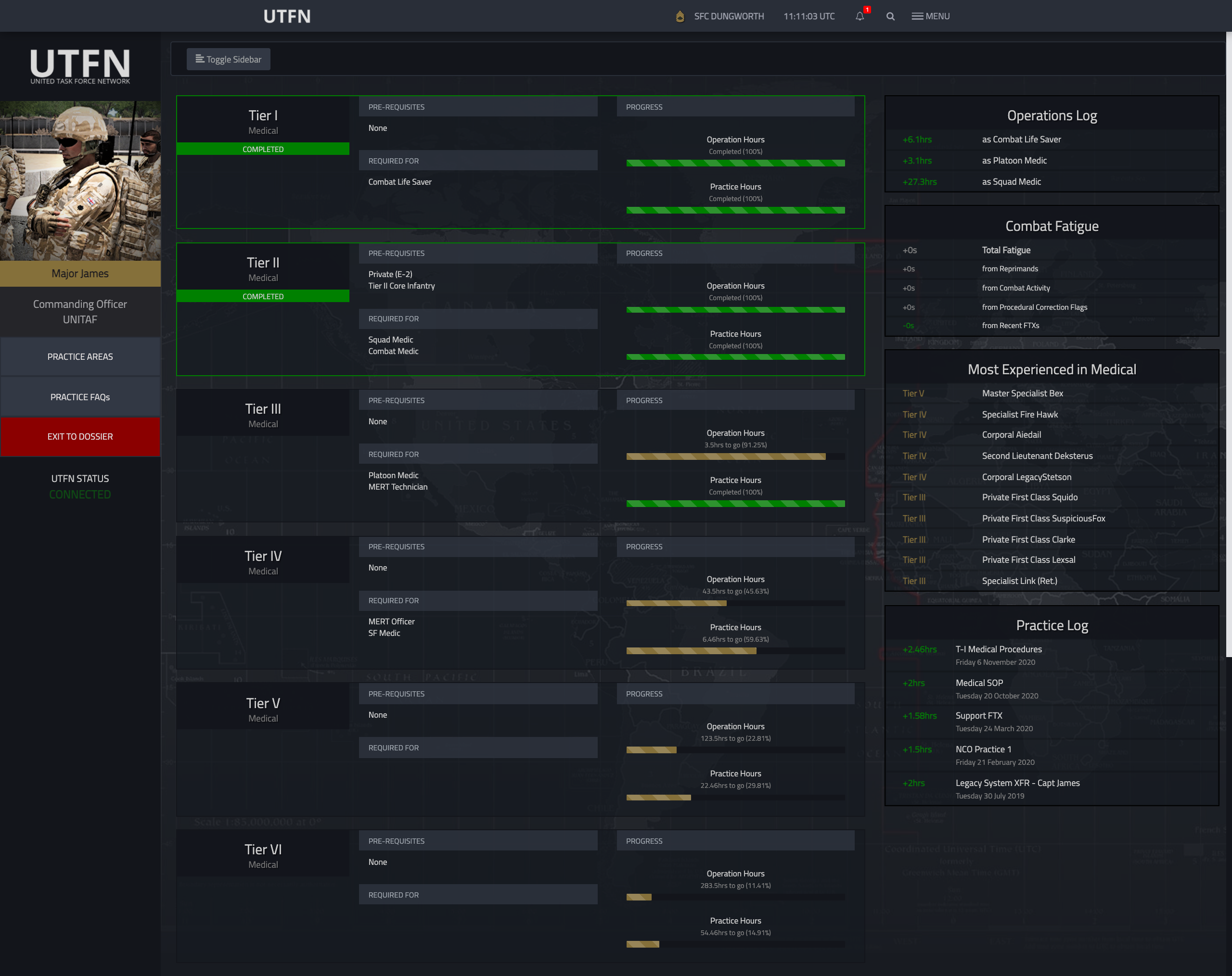 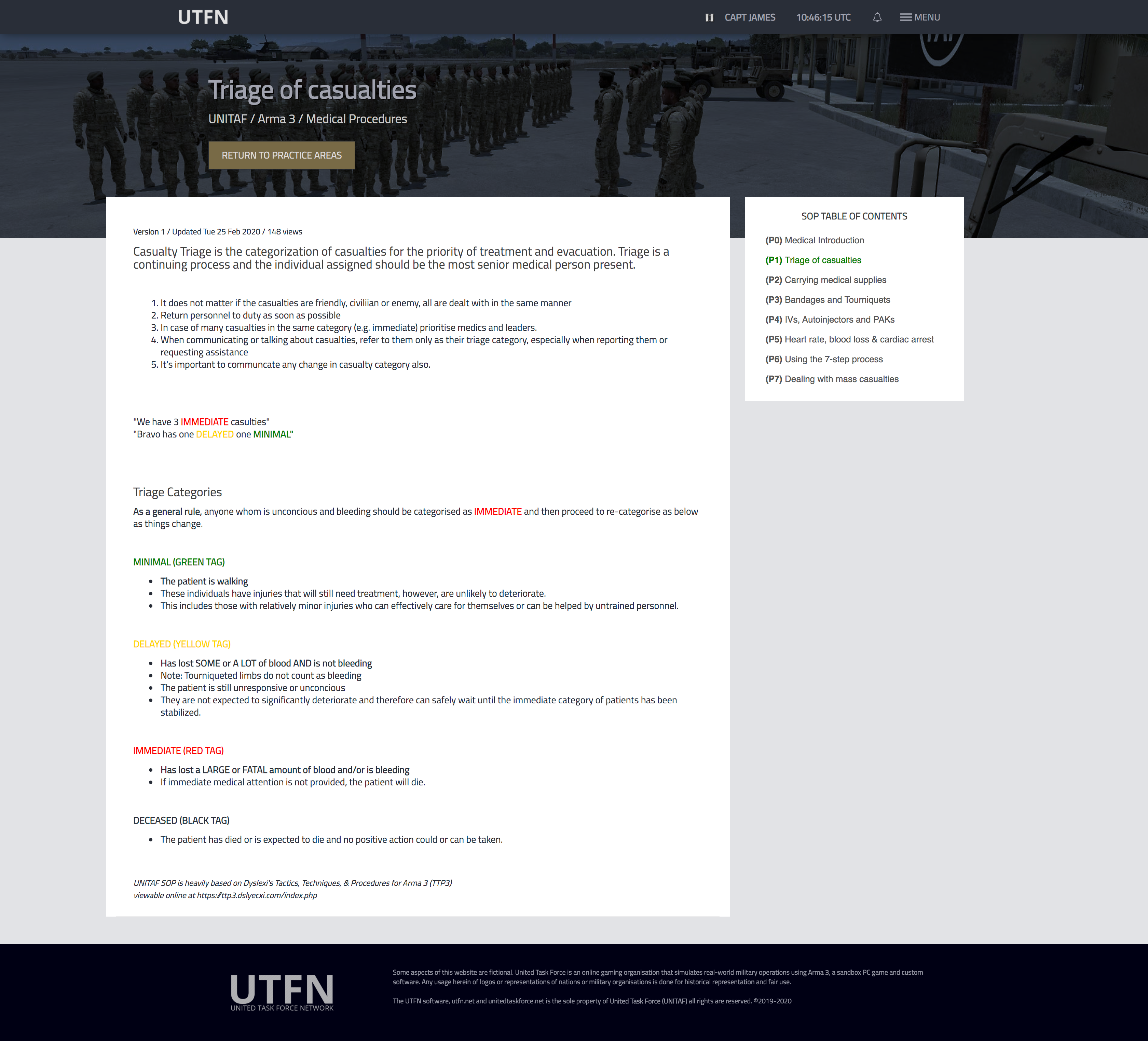 NOTE: We play campaigns, multiple missions joined together with common objectives and persistent taskings, The Ops center has ORBATs, OPORDs and Mod-Preset files, allowing you to choose roles, view upcoming and past Operations. Learn more about the roles available, how to qualify for them and the typical loadouts and responsibilities. 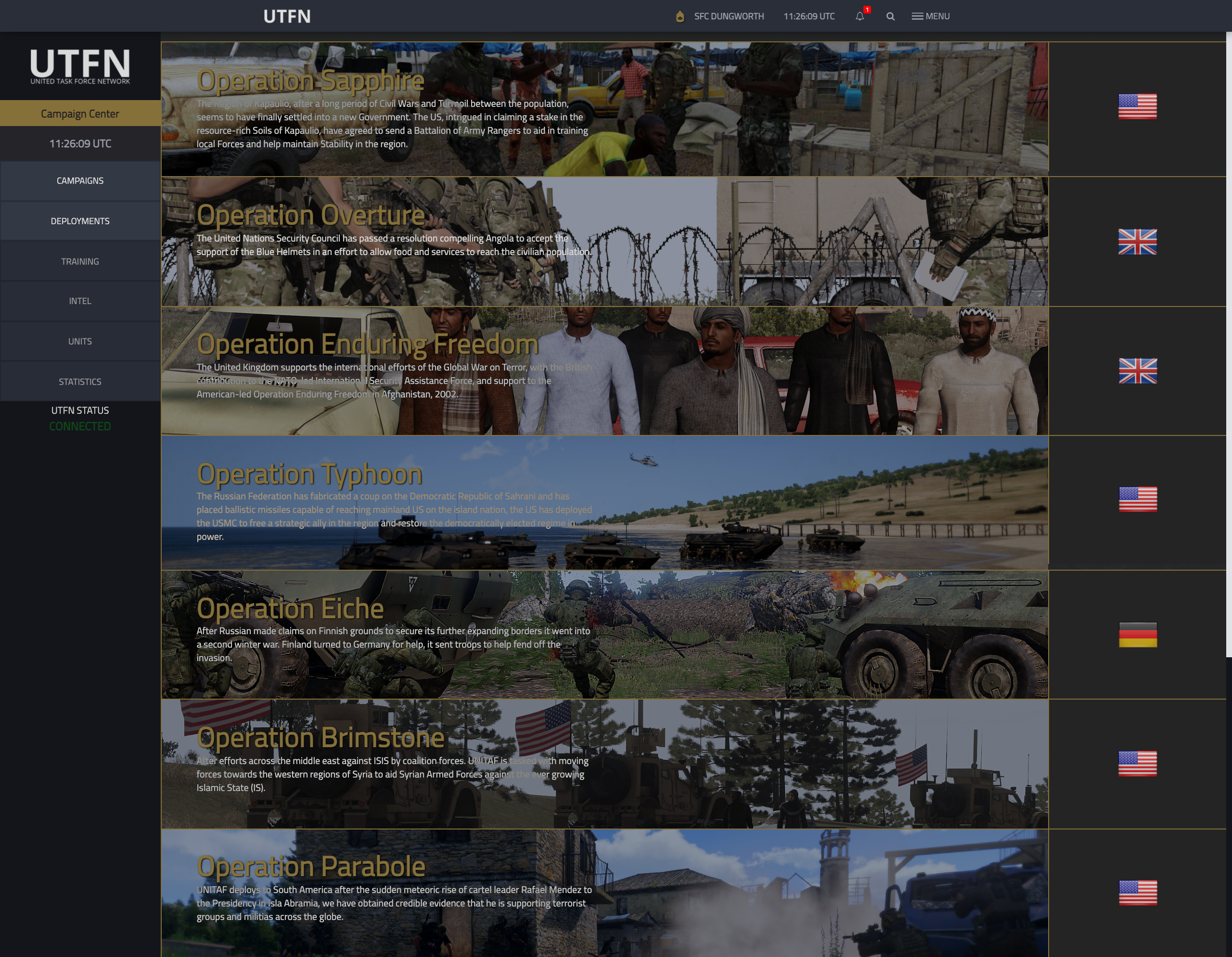 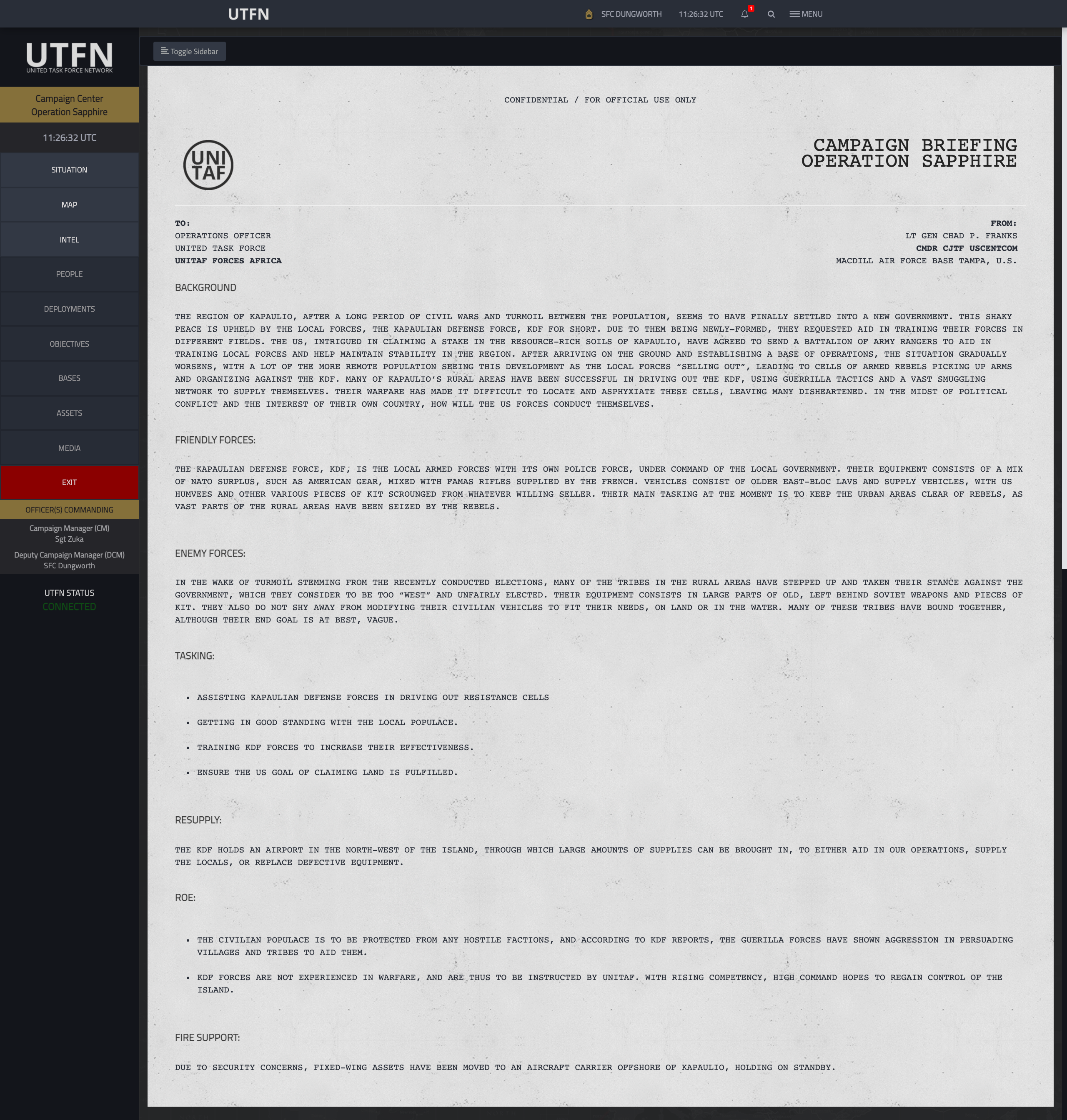 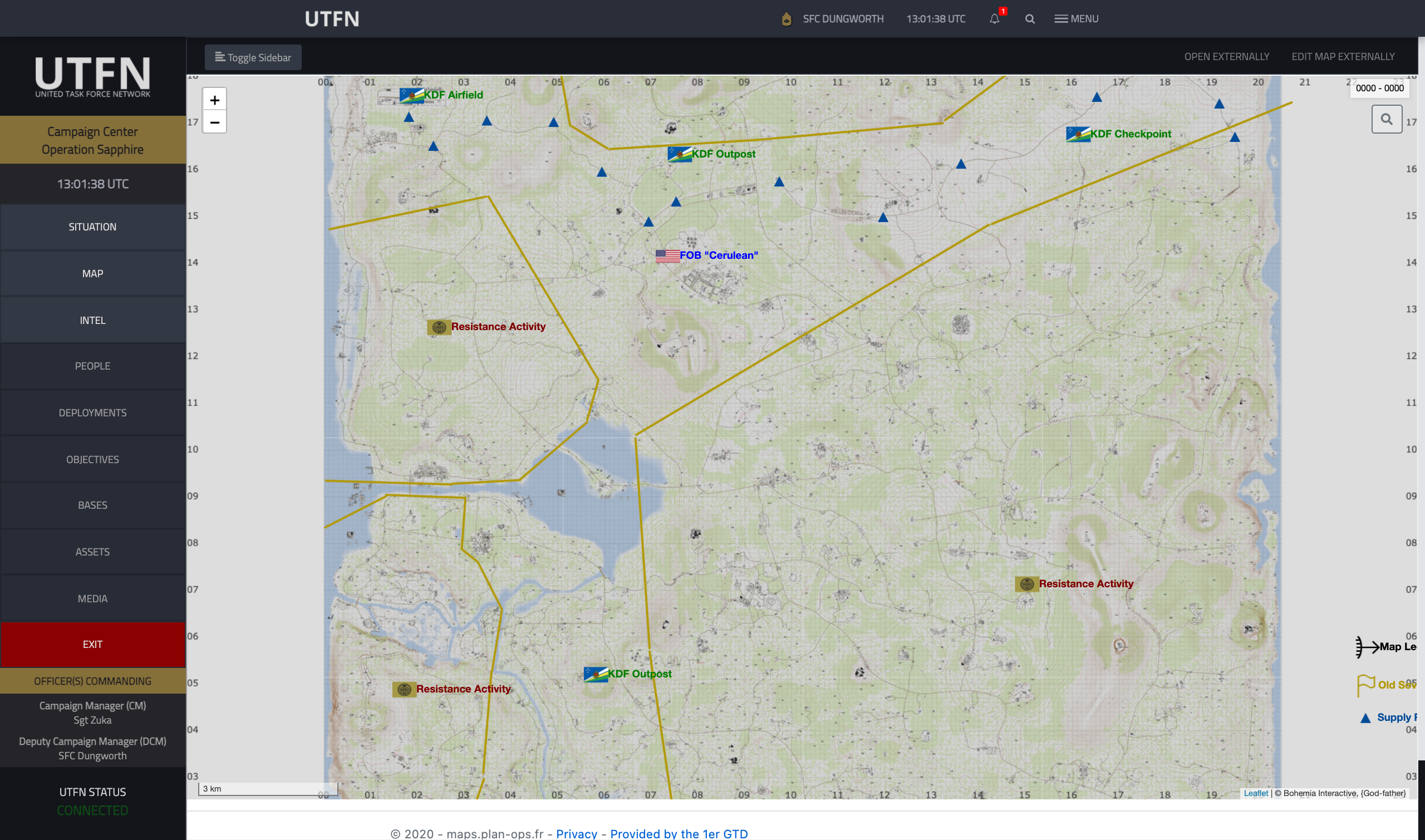 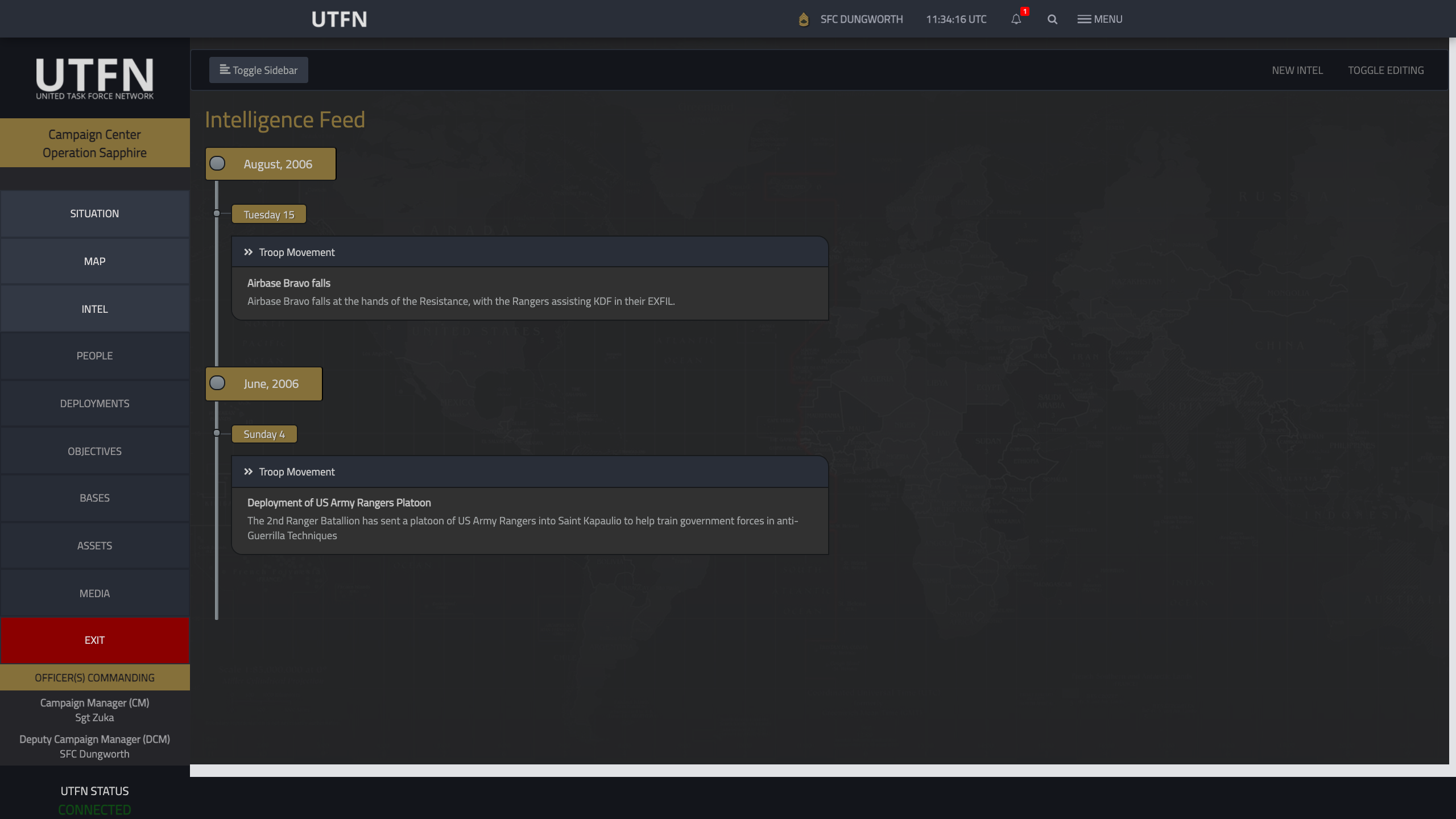 We don’t have multi-clanning rules

UNITAF is not designed to be a teamspeak or place to 'hang out' or be chained to. Its primary purpose is hosting regular operations and activities for the game, for members to attend. You can get as involved as you like and we encourage other groups or individuals from other groups to join UNITAF and deploy on them.

We currently simulate the US Armed Forces, British Armed forces and other NATO counterparts. However we have the flexibility and plan to add more and more countries to the task-force in the future. For the same reason, we also have the ability to simulate different branches of these nations.

We’ve got the infrastructure, we have Dedicated Servers, Teamspeak, Discord and Website supported and paid for. Mods we use the workshop for mod-distribution, we don’t have plans to change this right now, as it’s worked really well for us. We use the usual culprits such as RHS, TFAR, ACE, 3CB, CUP and we change this as our campaigns require it.

We’re designed for growth Pretty much everything in UNITAF was designed with hundreds of active members in mind covering all time-zones. Right now we’re a small fish, but we’ve built everything from the ground up with this in mind, and it’s why we put such a big focus on software. We’re not quite sure how groups of this size survive on Forums and Spreadsheets.
When we reach this size, simply the size and frequency of our operations will increase, and we hope to support other games that compliment our playstyle, for example DCS, using the same software and ORBATing systems.

We’re conscious of Arma 3’s lifecycle. We founded UNITAF in 2019, and it’s sole focus is currently Arma 3, our members and founders are long-term players, most since Operation Flashpoint and many of us have run large groups before, especially in Arma 2. Our aim with United Task Force is to create and organisation centered around our application called United Task Force Network (UTFN), that curates a community of people who like to play the way we do. Right now that’s in Arma 3, but who knows which game we'll add next, or move to in the years to come.

Visit our main website, our discord link is on the front page, and you can sign up and apply right now.