WARNING: This document is still a Work in Progress, just as the mod itself

The UNITAF Framework is a mod which adds a bunch of features to the operations hosted by UNITAF, and adds fixes to (known) issues with vanilla and/or modded features.

To allow players making EPIC screenshots during missions without giving access to the debug console.
All players can simply use the "Hide HUD" keybind (default alt+U) to toggle all HUD elements (including STHUD).

The UNTIAF Tablet, or UNITAB, is the core of each operation.
To acces the tablet, simply press the configured keybind (default control+U). 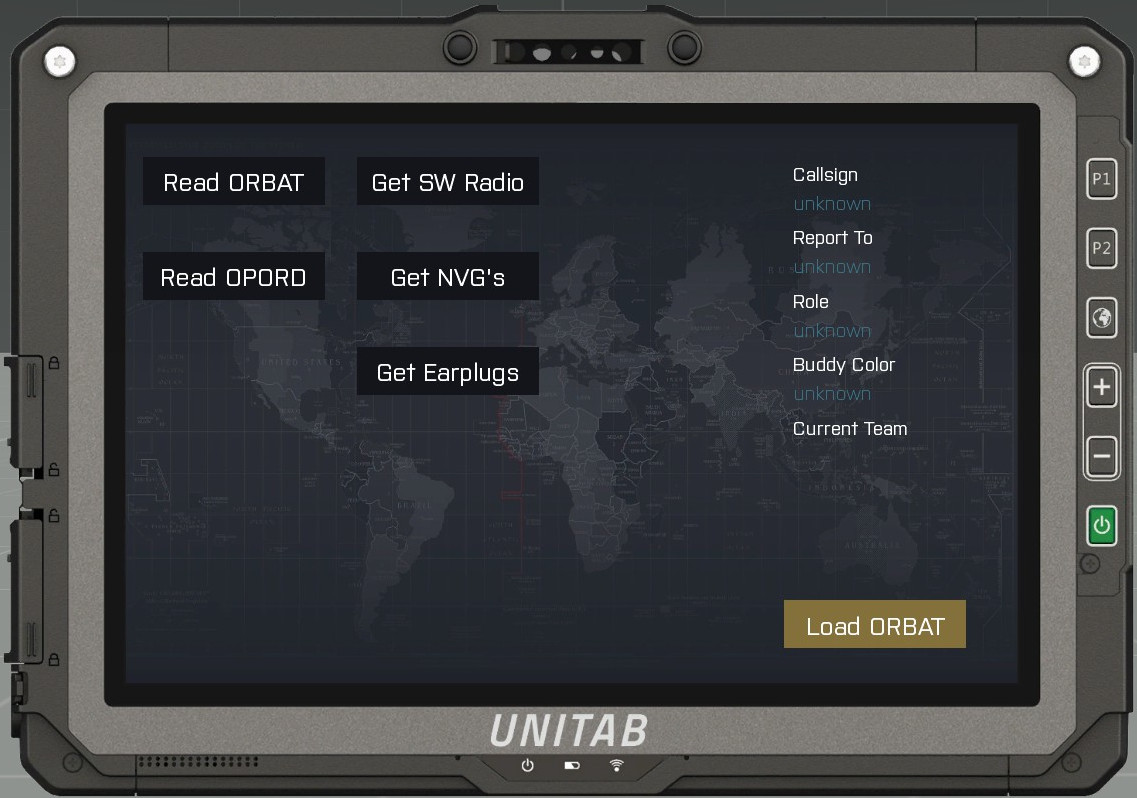 On the right side side there are several buttons on the tablet, each with its own function:

The OPS Menu is what all players have access to, and give access to a bunch of useful options:

Based on your role/function you might have additional buttons shown (after ORBAT has been loaded):

Although the mod is fully functional without any changes to the mission, there are a few things which can be done to fully integrate it with the UTFN Database.

To implement the framework in your mission, you can add the following settings in the description.ext file inside the mission folder:

To have players use the 'Load ORBAT' button on their UNITAB, they must be at base.
Defining a base (or FOB where people can respawn and therefor load the ORBAT) there are 3 methods to do that:

Each mission must have 10 markers with the variable names rp0-rp9, these 10 "rally points" provide the spawn positions. The Field Leader sets the spawn positions using the ORBAT via UTFN, so you only need to make sure that they exist.

If you're not using all the rally points, then just put them all in the same position. The default rally point is rp0, and any player with a non-assign respawn point will spawn at rp0.

If you want to help improving and expanding the UNITAF Framework you can, even if you're still learning how to do stuff in Arma.

To start working on Arma mods you'll need to make sure that you have a good setup to work on.

NOTE: more information will be put here on how to commit changes/features

Since the mod is (still) in development, there will always be issues with it. Here's a list of known issues: